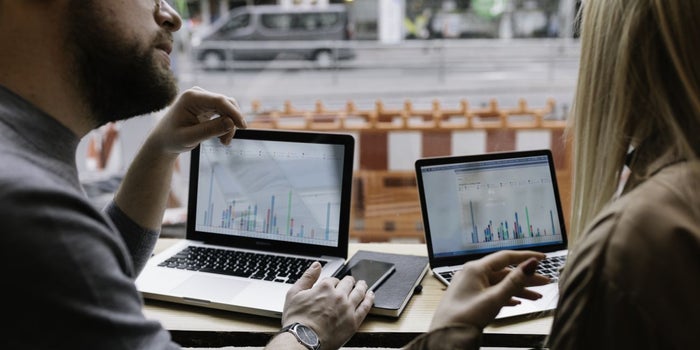 There’s no denying that digital marketing has become an integral part of business success — everyone’s business success. Companies investing in building an online presence have a much better chance of expanding their brands than do those clinging to a “brick and mortar” mentality.
In fact, the latter companies are falling by the wayside, a point underlined by the the facts outlined in this Trellis article:

Convinced that online sales are the way to go? Here are three strategies for pushing sales using new technologies.

Use blockchain to redesign supply-chain economics.

Technology and unique value offerings should be inherent to your overall strategy. SHOP is a business I know that provides a unique example of how to leverage a new offering using technology.

The company is a blockchain-based retail platform created by John Wantz (formerly of the Target store chain) and Jamie O’Shea (influential in marketing brands like Coca-Cola, Nike, Levi Strauss and Johnson & Johnson).

The SHOP system is designed to act as an information marketplace where users acquire brand tokens in exchange for sharing preferences, purchase histories, profiles on their preferred styles and other data.

The data is then stored on the SHOP platform and used to improve interactions and experiences between shoppers and company brands. This radical redesign of supply-chain economics provides a new type of alignment that the system has never before seen. Making data available empowers SHOP members to create new kinds of value exchanges and fair approaches to margin and price; and it represents an opportunity to drive innovation in unforeseeable ways.

In short, technology can provide a competitive advantage for any business, especially one scaling an ecommerce company.

Harness augmented reality for use by influencers and brands.

With the release of augmented reality (AR) developer kits by both Apple and Google in 2017, and the advance of hardware devices, AR is poised to hit the mainstream in the coming years. Already, Fluffr is using blockchain technology to disrupt the AR space. Its platform rewards users with tokens for the purpose of interacting with and promoting AR experiences by influencers and brands.

Dave Lee, partner at Brilliant Investment Group, explained to me that he’s excited to bring the technology to the Asian markets, because they’ve had disruptive AR tech experiences, but none that have fused cryptocurrency with AR. Lee said he believes that blockchain technology harnessed with augmented reality is going to create mass adoption across various Asian markets, and he’s excited to pave the way with Fluffr.

In regards to the Fluffr platform, two types of tokens are collected (Fluffs and Carats) in a way that’s similar to the characters in Pokemon Gó. The difference is that these tokens can then be exchanged for real currency or exclusive prizes through the Fluffr marketplace. The idea is to encourage people to use AR apps and engage in AR experiences, and get paid for it.

The result is an entirely new and immersive ecommerce experience for brands and consumers using the tech. Plus, with the release of Fluffr and other AR-focused platforms, the barrier to entry for companies to create these experiences for their consumers has become extremely low.

Access to accurate consumer data is key to more effective ad-targeting, and, ultimately, to a growth in sales. Some brands don’t even know if their targeted audience is made up of real people:  As an Axios article explains, about 20 percent of the $200 billion spent on digital advertising money is wasted on bots.

That’s why brands have to ensure that their databases contain real people who have given their permission to receive promotions. One such company is YouGov Direct, a product of YouGov, which works to help brands gain more value from their advertising campaigns through its blockchain-based platform and ad network. Essentially, if brands “know” rather than “assume” that consumers are interested in their products, they can provide those people with actual solutions — rather than waste ad dollars on the wrong people.

This article was originally published in: https://www.entrepreneur.com

What are the Benefits of e-Commerce to Your Business?

5 Ways to Stay Focused in a Distracted World

Great Teams Are About Personalities, Not Just Skills